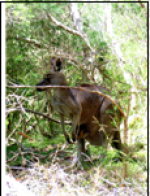 Whether you are looking for somewhere to take a gentle stroll or somewhere to take a closer look at wildlife, where else would you go but amongst the peaceful setting here in the Bayles Fauna Reserve. Here at the park you will find; Deer, Emus, Geese, Ducks, Kangaroos and even a rooster roaming around in our large reserve.There is also a new frog pond full of croaking frogs, including the Growling Grass Frog. Lots of local birds come and make the Park their home and can be spotted high up in trees, or down low on the ground.  The Park is also the home of the Southern Brown Bandicoot.
Look out for our rare golden kangaroos and the deers that hide in the bush.  They are sometimes inquisitive and watch at a distance.

History Of The Park

The Bayles township was named after Frederick Bayles, first member of the Railway Construction Branch to die in world War 1.  Commenced in 1921, the Bayles Station formed part of the Strzelecki Branch Line and also opening in the same year was the Bayles Butter Factory.  The railway brought cream, milk and potatoes from surrounding townships and transported the products to Melbourne.  Declining railway usage during the 1950’s led to the closure of the station in 1959. The Bayles Fauna Park now contains the most intact example of this historic railway line.

In December 1970, a local committee was established by the Crown Lands Department to consider the establishment of a reserve on twenty acres of crown land in the Bayles township.  The land consisted of previously closed roadway, railway station and yards with a recently closed and covered Cranbourne Shire rubbish tip.  Some of the vegetation is of significance, being a sample of what the country may have been like following draining of the Koo-Wee-Rup swamp.

With a Government Rural Unemployment Grant, the fencing began.  A gateway was identified and a local farmer built gates to complete the enclosure.  Great community support was contributed to the major part of the project which involved the removal of abandoned car bodies and truckloads of accumulated rubbish.  This was done with dragline, tip trucks, Graders, rotary hoes, trailers, etc. and finally the land was landscaped and sown with grass.

Officially opened in 1972, the concept of the Park was for an area where locals could enjoy roaming animals and wild life in a peaceful, natural environment.  With assistance from the Cranbourne Shire and later Cardinia Shire, it has been possible to preserve and enhance this concept.

The establishment of a museum near the reserve entry has allowed the display of gathered important local history. Ongoing support by the Department of Sustainability and Environment together with the all important public support will ensure the preservation of this precious natural habitat for future generations. 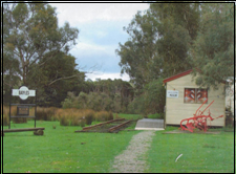